Looking For Stretches For Your SI Joint?

Stretching your SI joint is actually a BAD idea.  The SI joint isn't designed to move much.  However, stretching and strengthening exercises for the back and hip muscles can help if you have SI joint pain.

Watch the video to learn the best stretches for SI joint pain, plus exercises to stabilize the SI joint.

Your SI joint, or sacroiliac joint, is a an expansion joint between your lower spine (sacrum) and your pelvic bone (ilium).

The joints normally only move 1-3 milliammeters or rotate 1-3 degrees during movement.

Basically they are designed to help transfer loads from the legs to the spine as you move.  The SI joints are NOT designed to move like a knee joint, elbow joint, or hip (ball-and-socket) joint.

When the aforementioned SI ligaments get stretched out, that can create hypermobility - too much movement - in the joint.

Hypermobile SI joints are often the cause of chronic SI joint pain.

Therefore, it's NOT a good idea to stretch the SI joints themselves.

You don't want to create hypermobility.

What Can Cause An Over-Stretched SI Joint?

SI joint hypermobility can be caused by:

What About A Stuck SI Joint or Locked Up SI Joint?

As previously mentioned, a normal SI joint doesn't move very much to begin with.  So a stuck or locked up SI joint has almost NO movement.

SI joints that are hypermobile have a tendency to get "stuck" in an end-range lock position, where they are temporarily stiff or hypomobile (move too little).

A locked up SI joint can be incredibly painful and keep you from walking or standing up from a chair comfortably.

However, a locked up SI joint is really just a stuck hypermobile joint.

You need to get the joint unlocked, and spinal manipulation is a very effective treatment to unlock a stuck SI joint. As manual physical therapists, we use spinal manipulation quite often, but we also recognize when it's more appropriate to use other treatments instead.

Ultimately though, after you get a stuck SI joint unlocked, it returns to it's hypermobile state.  That means the long-term solution is still stabilizing the hypermobile SI joint so that it doesn't keep getting locked in the future.

Hopefully I've made a compelling case for why you DON'T want to stretch your SI joint itself.

That being said, stretching the muscles AROUND the SI joint can be helpful for SI joint pain relief.

Muscle imbalances can contribute to SI joint pain.  Some examples of these imbalances include:

Mostly, these imbalances involve your lower back, abdominal, and hip muscles. Below are some stretches for SI joint pain relief that target these muscles.

The child's pose is one of the best exercises to relieve lower back pain.

To do the child's pose, you kneel on all fours and rock your hips back toward your heels.

One of the reason child's pose such a great stretch for SI joint pain is that it allows you to stretch muscles both above and below the SI joints.

Hip flexor stretches are also great for SI joint pain as well as lower back pain.

Most people think they have stiff hamstrings.  In reality,  most people aren't as stiff in their hamstrings as they think.

Doing a typical "hamstring stretch" does put your sciatica nerve on tension, so often people feel stiff or tight.

Since your hamstrings attach to the back of your pelvis (ischium), they can affect your SI joint.

Read this post about Hamstring Stretches to learn stretching tips that many people don't know.

Your piriformis muscle runs from your sacrum to your hip thigh bone (femur) without a direct attachment to the ilium.

That means an imbalance between the left and right piriformis muscles can cause your sacrum to twist between the ilia.  In turn, this sacral torsion can cause SI joint pain.

Learn 2 different piriformis stretches in this post, plus how to know which one is best for you.

What Are Other SI Joint Exercises For Pain Relief?

As previously mentioned, the most important long-term solution for SI joint pain is stabilizing the joint so that it doesn't keep locking up.

If your SI joint ligaments have become overstretched, stabilization comes by way of strengthening the muscles around the joint.  Here are some strengthening exercises for SI joint pain relief.

The deep abdominal muscles, namely your transverse abdominis is one of the main stabilizing muscles of the SI joint.

As the name suggests, it runs transversely (side-to-side) between the two ilia.

Pulling your belly in as if trying to fit into a tight pair of pants and slightly tilting your pelvis is one way to strengthen the transverse abdominis.

You don't necessarily need to "make time" to do this exercise either.  You can do it pretty much anywhere at any time.

And the more often you do it during the course of your day, the easier it gets and the sooner you'll likely start feeling better.

This is also a very important exercise to do if your lower back hurts from standing too long.

Strengthening your glute muscles, and particularly your gluteus maximus (butt) muscles is also an important type of exercise for SI joint pain relief.

The gluteus maximus is really the only muscle that directly connects to BOTH the sacrum and the ilium, so it's important not to neglect your glutes.

Squats and leg presses are great exercises for your glutes, as are lunges.

However, if your SI problem is really irritable, you may want to avoid lunges initially because it puts your legs in an asymmetrical position which can cause your SI joints to rotate.

Once you've gotten over the acute phase though, lunges are a great exercise to prevent a recurrence of SI joint pain because they work each side of the glutes independently of the other. 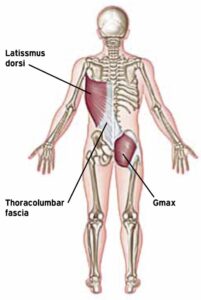 When both muscles contract at the same time, they stabilize the SI joint diagonally.

Pullups or lat pulldowns are good exercises to strengthen the lats.

SI belts do often help if you have a hypermobile SI joint.

SI belts are worn around your pelvis to compress the SI joints and make them stable.

There are some downsides to SI belts though:

They're not particularly comfortable.

It's hard to sit down in them.

When you're walking or running, SI belts can slip out of place.

They're good for short-term relief when being active, but you shouldn't wear them all the time. They're also not an optimal long-term solution.

What Other Treatments Can Help SI Joint Pain?

As previously mentioned, spinal manipulation is very effective for actue SI joint problems when the joint gets locked or stuck.

Trigger point therapy or dry needling can also be helpful to relax muscles that are in spasm.

Most importantly, learning how to move properly during daily activities can help prevent your SI joint pain from coming back.  Some of these activities include:

The best treatment for SI joint pain is to see a physical therapist who can give you an individualized treatment plan based on your unique signs and symptoms and the things you want to get back to doing.

Get Help For Back Pain
Get Help For Hip Pain
Physical Therapy In West St. Louis County
Dry Needling