Do You Get Pain In The Back Of Your Knee?

Watch the video to learn what causes knee pain in back of the knee, and how to relieve it

What Causes Pain In The Back Of The Knee?

There are many things that can cause this pain. To decide how to best treat your knee pain, you first need to understand what's causing it.

A Baker' cyst was listed last on the list above, but if you Google "What causes pain in the back of the knee?", a Baker's cyst is likely the first thing that will pop up.

However, Baker's cysts are present in many people who don't have knee pain. Likewise, not everyone with pain in the back of their knee has a Baker's cyst.

So clinically, I find Baker's cysts to be the least common and least important of the causes listed above.

So what is a Baker's cyst?

A Baker's cyst is a fluid-filled pouch in the back of the knee.  Baker's cysts don't just pop up for no reason though...

They're usually caused by inflammation from some other structure in the knee... for example arthritis, or a meniscus tear.

If Baker's cysts get really large, they can be drained, but that doesn't fix the problem that was causing the inflammation in the first place.

So the take-home point on Baker's cysts is this:

Even if they're present, they're not always the cause of your pain, and even if they are painful, it's still important to find out what was causing the inflammation in the first place and treat that problem. 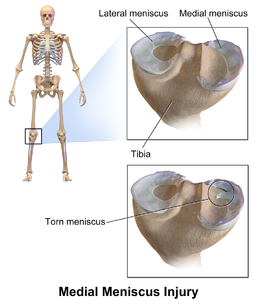 Symptoms of meniscus tears can include:

Now there are also other things that can cause these symptoms as well, but the most crucial symptoms are the locking or giving way of the knee.  Pseudo-locking or pseudo-instability can be caused by other knee problems.

The most particular one is patellofemoral pain syndrome, causing pain on the outside or inside of the knee.  However, if the knee actually gives way, causing you to fall, that's more concerning.

Acute meniscus tears typically happen with more vigorous types of activities such as sports, particularly when twisting is involved.

Meniscus tears can happen as more chronic, degenerative problems as well.  However, not all people with meniscus tears have pain.

Meniscectomy, surgical removal of part of the meniscus, can lead to quicker joint degeneration and increase chances for early onset of arthritis, so it is generally advised to leave as much of the meniscus intact as possible. 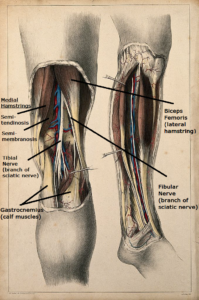 Clinically, I find calf or hamstring muscle problems such as tendinopathy or trigger points in the muscles themselves to be the most common cause of back of the knee pain.

However, these areas are also the least commonly discussed problems if you research them online.

Why are muscle problems not commonly discussed causes of back of the knee pain?

The reason is because often you can't see these changes on an MRI, or at least they're not as obvious as something like a Baker's cyst, or a meniscus tear.

But commonly even if you do have Baker's cyst or meniscus tear, the muscle imbalance was likely there first and may have been a factor that contributes to the meniscus tear or baker's cyst.

Why do calf or hamstring muscle problems cause pain in back of the knee?

As you can see from the image above, the calves and hamstrings both cross the back of the knee joint and tendinopathy where they attach can be a common cause of this pain.

The hamstrings are made of up 3 muscles: the biceps femoris (the outside or lateral hamstring) and the semitendinosis and semimembranosis which are the inner or medial hamstrings.

The semitendinosis tendon actually wraps around and attaches to the front of the knee and can be a common cause of pain on the inside of the knee.

There is also a bursa, or a fluid-filled sac that sits between the semimembranosus and the medial gastrocnemius (inner calf muscle) which can be mistaken for a Baker's cyst when inflamed.

As such overusing the semimembranosus muscle can cause pain in the back of the knee when bending or straightening the leg.

Problems with the sciatic nerve, or it's branches can cause this pain too.

However, there are also other places where the sciatic nerve can become pinched or entrapped such as in the lower back or in the buttock. When the sciatic nerve is entrapped at more than one of these areas, the effects can cumulate, causing extra sensitivity

This is a serious, albeit much less common cause of pain in back of the knee.

This happens when a blood clot forms in the deep veins in the leg, which can cause pain and swelling of the calf and lower leg.

Fortunately, deep vein thrombosis can reliably be ruled out using this calculator based on the Wells Criteria for DVT.  If your score is 0 or lower, you have a very low risk of DVT.

Talk to Our Knee Pain Specialist For Free...

What Causes Pain In Back Of The Knee When Straightening The Leg?

When you sit with your knee bent for a long time, your hamstrings and calves are in a shortened position and can get stiff. How does this cause back of the knee pain?

Well, when you go to stand up from sitting, if your calf inner hamstring muscles (particularly the semimembranosus) are still stiff, they can cause stiffness and pain in the back of the knee when as you straighten your leg when standing up from sitting.

What Causes Pain In Back Of The Knee When Bending?

Pain in back of knee when actively bending knee

Similar to above, if either your inner or outer hamstring are being overused when bending your knee, this can cause knee pain as you actively use your hamstrings to bend your knee.

Pain in back of knee when passively bending knee

If you get pain in the back of the knee when in an endrange bending position, such as squatting, kneeling, or using your hands to pull your heel to your bottom, this is more of a passive knee bend.

You're not actively using your muscles to bend the knee in this circumstance, so if you still have pain in the back of the knee, this would indicate a structure is being pinched - either your meniscus, sciatic nerve or it's branches, or a Baker's cyst.

There is a joint between the two lower leg bones behind which the fibular nerve, a branch of the sciatic nerve, runs and if this joint is stiff, it can cause pain with the knee in an end-range bending position as well as pain on the outside of the knee or numbness or tingling in the leg and foot.

Stretches For Pain In Back Of Knee

Choose one of the options below...