What Are The Best Exercises For Biceps Tendonitis?

You actually have 3 biceps tendon.  Biceps means literally three heads. So you have two heads of the biceps at the shoulder, and the join together into a common tendon at the elbow. 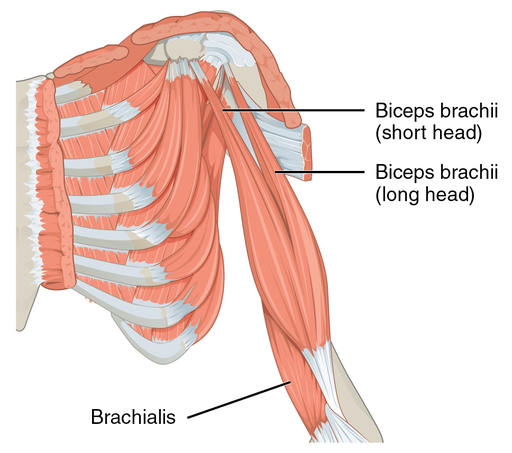 Each head of the biceps has it's own tendon, so therefore, you have 3 biceps tendons:

Of these three, the long head of the biceps is the one that most commonly gets tendonitis.

If you just say "I have biceps tendonitis" most health professionals would assume you're talking about the long head unless you specify otherwise.

The distal biceps tendon attaches the two heads of the biceps to the one of your forearm bones, the radius, just past the elbow.

Tendonitis of the short head of the biceps is rather rare, but it can happen, especially if have shoulder pain reaching across your body.

Biceps Tendinitis In The Shoulder

Biceps tendinitis in the should isn't usually caused by doing things like biceps curls or other biceps exercises,

It's usually caused more by overhead movements with your shoulder.

Biceps tendinitis is more common in active people, particularly throwing athletes like baseball pitchers.  It's also common in eople who play overhead sports like tennis or volleyball, or people who lift weights overhead.

If you use your arms over your head a lot you're more likely to pinch the biceps tendon.

The long head of the biceps attaches at a bone on the top of your shoulder joint called the supraglenoid tubercle. 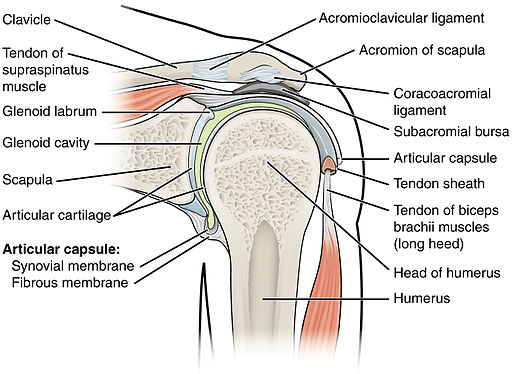 As you can see, the space that the biceps tendon runs through is very narrow. It's about a centimeter wide ad best.

If you happen to have some bone spurs in your shoulder, they can narrow the space even further.

There are also several other structures that have to run through that space such as your rotator cuff tendons and a bursa.

So there are a lot of things that can get pinched and when you have an impingement in your shoulder.

And often its more than one of these things!

So you may get a lot ofdifferent diagnoses:

Those are all different names for saying that you're pinching something up underneath the shoulder.

So that's one way that the long head of the biceps can get injured.

However, as previously mentioned, the long head of the biceps also attaches into your labrum.

Your labrum is like a fibrocartilage disc that makes the shoulder more stable.

You can injure that either from a shoulder dislocation or like throwing athletes who go back into this cocking position with their arm way back.

When your shoulder is in this position that makes the ball glide forward in the socket and it can bump out into the biceps.

Now another additional thing that can cause that biceps tendon to get irritated is if you tear the ligament that holds the biceps in place, the transverse humeral ligament.

The long head of the biceps tendon normally runs between two bumps on your shoulder called the greater tuberosity and the lesser tuberosity. The transverse humeral ligament normally keeps the bicep tendon in place between those two bumps.

However, if you tear that ligament, you may irritate the biceps tendong when doing rotational movements with your arm such as a throwing motion.

You may feel popping in your shoulder like when youmove your arm back and forth.

Tearing that ligament is rather common, and in many cases it may not even painful.

It's usually not a big deal unless it starts to give you symptoms.

However, if you've read this far down on the page, chance are it may be giving you symptoms.

What Are The Symptoms of Biceps Tendonitis?

The primary symptom of biceps tendonitis is shoulder pain.

You may feel shoulder pain when going into a cocking motion as if throwing a baseball or when lifting things over your head.  You might also get pain when reaching cross your body.

Additionally, you may notice a snapping or popping in your shoulder as noted above.

So What Are The Best Exercises For Biceps Tendonitis?

That's probably ultimately why you're reading this post, right...

The exercises for biceps tendonitis are NOT

In fact the exercises for biceps tendonitis really have nothing at all to do with the biceps muscle itself.

The biceps tendon usually gets inflammed because of poor mechanics at the shoulder joint.

In other words, if the ball of the shoulder (the humeral head) isn't staying centered in the socket, the tendons can get pinched.

That may be your rotator cuff tendons and/or your biceps tendon.

But the treatment is the same regardless of which structure is actually causing your pain.

In order to treat biceps tendonitis, you need to do exercises that address the faulty movement at the shoulder joint that's causing the inflammation.

So which exercises can improve the movement of your shoulder joint?

There are a few exercises to improve the movement of your shoulder joint, but largely they focus on:

Check out the links to the posts above to learn more about how to do these exercises.

Additionally, stretching your chest muscles and latissimus dorsi muscles can help improve the movement of your shoulder blade when reaching overhead or throwing a ball.

Again though, remember that the exercises for biceps tendinitis are NOT doing biceps exercises or stretching your biceps. In fact, sometimes doing these exercises just aggravates the problem if  you have biceps tendonitis.

What other exercises can you do if you have biceps tendonitis in your shoulder?

The biceps muscle doesn't just bend your elbow like many people think.

It also helps life your arm up to shoulder level, particularly when you're lifting with palm up.

So if you do have an injury to your biceps tendon, you want to avoid lifting thing in a palms.

However, if you lift thumbs down, that also puts your shoulder in a position where you're going to pinch the rotator cuff tendons.

So if you're lifting things, whether that be doing front raises at the gym or just lifting things up into an overhead cabinet, it's best to keep a neutral position with your thumb up.

What About The Short Head Of The Biceps?

The short head of the biceps (shown in green below) attaches to the coracoid process on the front of the shoulder blade.

Because of it's attachment, it can sometime get pinched against the coracoid process when reaching across your body.

Exercises For Biceps Tendonitis At The Elbow

The distal biceps tendon is where both heads of the biceps join together to attach at the elbow.

How do you get biceps tendonitis at the elbow?

It's usually from repetitive overuse such as doing biceps curls with your palms up.

So what's the treatment for distal biceps tendonitis?

Largely, backing down on training volume helps a lot, particularly if you're overtraining your arms.

Either decrease weight, repetitions, or days per week that you train your arms.

If you want to continue training your arms, you can change your technique when doing arm curls to minimize the biceps involvement.

So if you do your curls with palms down (reverse curl), you can still strengthen the brachialis muscle (the muscle beneath the biceps) without emphasizing the biceps tendon. 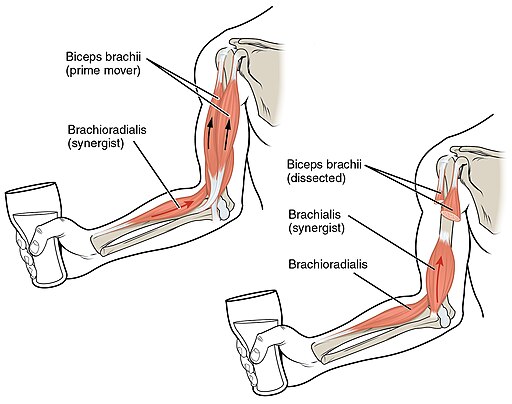 Additionally doing hammer curls with your thumbs up and palms facing inward also puts less tension on the biceps tendon and allows you to use your brachioradialis muscle in your forearm to assist the biceps.

What About Surgical Treatment For Biceps Tendonitis?

Most of the time, surgeons will choose not do do surgery for biceps tendonitis.  If the long head of the biceps tendon is frayed and it's causing pain sometimes a surgical release of the tendon can relieve the pain.  By release, I mean they cut it and reattach it to your arm below the bicipital groove.

This surgery is called a biceps tenodesis.

However, it takes 4-6 months recovery after biceps tenodesis surgery to regain normal function and up to a year for full recover.

Because of the extensive recovery time, most people don't need surgical treatment for their biceps tendon, even if it's completely torn.

Since you have 2 heads of your biceps, you can function reasonably normally with only the short head attached.  You may have a slight decrease in arm strength and mild upper arm deformity called a "Popeye arm" from the ruptured long head.

However, unless you're a competitive athlete or you do heavy manual labor, you'll still most likely be able to do your day to day activities without pain after a course of conservative treatment.

If you need treatment for biceps tendonitis, physical therapy can help.  Physical therapy is more than just doing exercises, at least the way that we do it here at More 4 Life.

We'll help you figure out what's causing your biceps tendon to keep getting irritated, and what you can do to stop it.

We use hands-on treatments to get you quick relief from your pain while addressing the root cause of the problem so that it doesn't keep coming back.

If you need treatment for biceps tendonitis, tap the button below to request an appointment with one of our specialist physical therapists to find out how we can help.