Try this exercise to relieve a knot in the shoulder blade, and learn what to do to keep it from coming back.

What Causes A Knot In The Shoulder Blade?

What are muscle knots?

The main cause of muscle knots is something called a trigger point.

A trigger point, or in layman's terms, a "knot", is an area in the muscle where it's contracted and can't relax.

If you look at a muscle underneath a microscope it has some overlapping filaments called actin and myosin. They overlap each other in what's referred to as a sarcomere.
These sarcomeres are lined up back to back to back in order to make up a muscle.

When you stretch your muscle, the filaments in the sarcomere slide apart, and when you contract your muscle the, myosin head attaches to the actin filament and pulls it closer to the center of the sarcomere.

That process of the filaments attaching to each each other and shortening happens automatically. It's exothermic, meaning it releases energy.

What actually takes energy is to release those those bonds and reset the myosin head so that it's in a position to contract again.

It's counterintuitive, but that's the way that it works.

So what happens when you have a muscle knot?

Well those actin and myosin filaments won't let go of each other creating a sustained contracture of the muscle, which produces a muscle knot.

When a muscle has been knotted up for a long period of time, it can impair the microcirculation to the area.

The small blood vessels in the muscle, the capillaries, aren't able to get oxygen to the muscle.

However, without oxygen, your muscles can't turn glucose into energy, or ATP (adenosine triphosphate).

Without ATP, the myosin heads can't detach from the actin filaments and your muscles stay knotted.

That becomes a vicious cycle where the knot just won't go away.

So how do you get a muscle knot in the shoulder blade to relax?

You have to use some tricks to make that muscle relax, and we'll go through those in the rest of this post.

3 Causes Of Knots In The Shoulder Blade

When people refer to a "knot in the shoulder blade", they usually refer to one oft three different areas.

3 Areas Where People Develop Knots In The Shoulder Blade:

Knot On Top Of Shoulder Blade

The first area that people tend to get knots is right on top of the shoulder blade.

People may develop pain or stiffness there from working crouched over a desk or looking down at their phones all day.

It's really common for people to develop knots or trigger points in those areas.

One cause of a knot on top of the shoulder blade is your levator scapula muscle.

The levator scapula runs down from your our neck and it attaches right into the top of the shoulder blade. 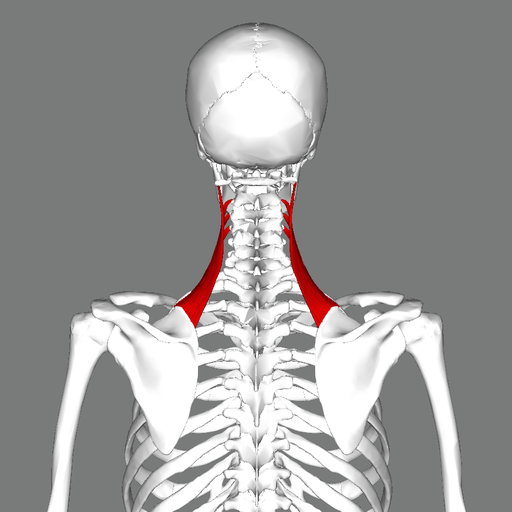 Additionally, the upper trapezius muscle may also cause a knot on top of the shoulder blade.

That can happen from that muscle being too tight and held stiff, but it can also happen from the opposite problem where the muscle is overstretched.

Perhaps you always carry heavy things in one hand or you carry a purse over or heavy bag over the same shoulder. That presses down on the shoulder blade and it overstretches the muscle.

Your muscle senses is that it's being overstretched, so it contracts or shortens in order to protect itself from injury.

That's a good thing that your body has the intuition to do that.

However, if you do that repeatedly over a period of time, you can develop a trigger point or knot in your neck and shoulder muscles.

Research has shown that it actually doesn't take a whole lot of time for those trigger points to develop. In fact, you can develop trigger points in less than 1 hour of continuous typing.

So, poor sustained postures can be a big cause of knots in the shoulder blade, so it's important to use proper posture when working at a desk.

Knots On Back Of The Shoulder Blade

Trigger points or knots in the infraspinatus muscle can cause referred pain all the way down the arm as well as local pain in the shoulder blade.

If you have a painful knot right on the shoulder blade itself, chances are that it could be the infraspinatus.

You may have difficulty with:

When you do those things, the ball of your shoulder has to be able to glide backwards in the shoulder socket, and if that infraspinatus muscle is too tight it's going to keep the ball from gliding backwards.

Knots Between The Shoulder Blade And Spine

If you get knots in the upper back between the shoulder blade and the spine, that may be caused by the middle trapezius (shown above) or rhomboid muscles (shown below). 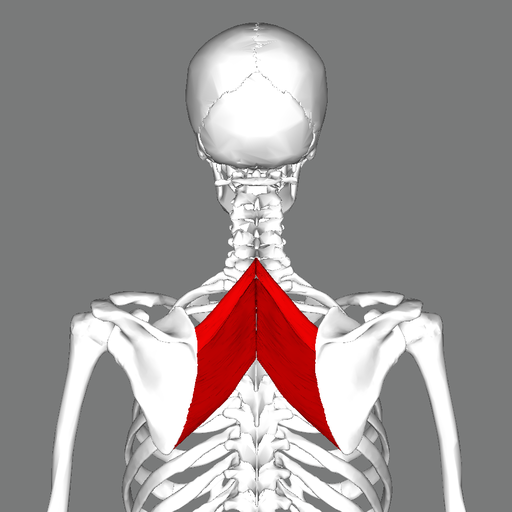 The rhomboids and middle trapezius pull your shoulder blades backward.

You can develop knots in those muscles from sitting with military type posture trying to sit with "good posture".

You don't want to slouch excessively, but your upper back is supposed to be rounded a little bit.

As mentioned above, you can develop knots in muscles from them being overly short or overly lengthened. Therefore, it's important to find a happy medium.

How To Relieve A Knot In The Shoulder Blade

So what can you do to relieve a knot in your shoulder blade?

Well there are some treatments that we can provide in physical therapy.

Some of those treatments include:

Need Treatment For A Knot In The Shoulder Blade?

Tap the button below to request an appointment

How Can I Treat A Knot In My Shoulder Blade At Home?

If you're more of a do-it-yourselfer there are some ways you can relieve knots in the shoulder blade on your own.

Sometimes these ways aren't as fast or effective as having someone else do it for you, but here are the options.

Instead of somebody else pressing on your shoulder blade and applying pressure to the trigger point, you can roll on a ball such.

You can use a tennis ball, or a racquetball, or a trigger point massage ball that's specifically made for that purpose.  The ball shown above is called The Orb. My wife and daughter refer to it as "The Orb Of Pain" because it does kind of hurt when you roll on the knots in your shoulder blade.

But it's the feel good type of hurt that it "hurts so good".  In other words, you kind of know that by doing it you're going to feel better afterwards, so you're okay to put up with the short-term discomfort that it causes

You shouldn't feel worse after doing this, at least not for more than a minute or two.

You may have a little bit of residual soreness from rolling on the knots in your shoulder blade, but ideally you should feel better afterwards.

If you try this and it makes you feel worse, stop doing it consult a physical therapist.

Unfortunately though, that only lasts for a short period of time: maybe 10-15 minutes on the short or a few hours or even a day if you do a really good job at it.

Eventually though, those trigger points or knots will come back.

How To Keep Knots In The Shoulder Blade From Coming Back

If you've got a knot in your shoulder blade that won't go away or keeps coming back, you need to find the underlying root cause of WHY it's happening.

Often, those causes may be postural problems or muscle imbalances.

The location of the knot, may give you a clue as to which muscles are too stiff or too lengthenedg.

But even deeper than that you need to determine what the activity or postion has caused the muscle imbalance to develop over time.

Perhaps it was spending too much time working at a desk with poor posture.

Perhaps it's poor throwing mechanics if you're a throwing athlete or hitting a ball wrong if you play tennis or pickleball or golf.

Maybe it's from carrying a heavy purse.

The possibilities are limitless.

There's another consideration that we haven't talked about yet though.

The nerve roots in your lower neck, particularly C6, C7, or C8 can refer pain down into your shoulder blade and upper back.

If you're having pain down in the shoulder blade, you want to make sure to rule out a pinched nerve in the neck as well.

If you just keep rolling the knots on your shoulder blade, but you've actually got a neck problem, the pain probably won't go way... at least not for good.

In order to get long-term, lasting relief you have to determine:

We keep digging deeper until we get to the root cause of the problem and not just find out what that is but help explain it to you in a way that you can understand so that you can best help yourself.

Need Treatment For A Knot In Your Shoulder Blade?

Tap the button below to request an appointment with one of our specialists.