If you’re reading this post, you probably either have a fibromyalgia diagnosis, symptoms of fibromyalgia pain, or you know someone with fibromyalgia.  Fibromyalgia is puzzling and frustrating for both people who suffer from it as well as for their family members, friends, and even their doctors.  The reason for that is because fibromyalgia is not well understood.

We see a lot of patients with fibromyalgia here at More 4 Life, so the purpose of this post is to clarify some of the information (and misinformation) about fibromyalgia pain in order to ease some of that frustration.

If you break the name “fibromyalgia” down in to it’s component parts “fibro” - meaning fibrous,  and “myalgia” – meaning muscle pain, it literally it means muscle pain caused by fibrous “knots” or tender points that are present in the muscles of people with Fibromyalgia.

However, fibromyalgia is MUCH more than a disorder of muscles. It’s a disorder characterized by widespread pain, fatigue, sleep disturbance, and cognitive/memory problems (referred to as “fibro fog”). There is also a high association with anxiety and depression.  Fibromyalgia occurs much more commonly in women than in men.

Fibromyalgia is essentially a heterogenous condition – meaning it’s not ONE thing.  A diagnosis is really just a label that the medical community applies to a set of signs and symptoms so that we can talk about them more easily.  But a diagnosis in itself really doesn’t lead treatment.  That’s true for many different conditions such as back pain, headache disorder, depression, high blood pressure, and fibromyalgia.

One thing that the medical community does agree on though is that fibromyalgia is a condition where the nervous system becomes more sensitive something referred to as “central sensitization”. When the central nervous system becomes more sensitive, it transmits messages more easily than would a normal system.  Think of turning up the sensitivity on the smoke detector in your house.  If it becomes a little more sensitive, sometimes it only takes a very tiny amount of smoke such as from normal cooking to set it off.

This is essentially what happens in fibromyalgia.  The system becomes more sensitive to stimuli such as touch, pressure, temperature, chemicals, foods, etc. As such things that should usually only be a little painful might be a lot painful, and sometimes when the system gets REALLY sensitive things that shouldn’t cause pain at all may in fact cause pain.  Read more about chronic pain here.

It also means that people with fibromyalgia may be more sensitive to other factors.  For example, fibromyalgia often hurts worse when it’s cold or rainy out.

How Is Fibromyalgia Diagnosed?

The current diagnostic criteria for fibromyalgia by the American College of Rheumatology is based on the number of painful body regions and the presence and severity of fatigue, cognitive difficulty, and unrefreshing sleep that has lasted for longer than 3 months without an alternate explanation.  Note that these are all clinical symptoms reported by the patient.  There is no diagnostic test for firbromyalgia such as a blood test, MRI, or CT scan.  Since fibromyalgia can’t be seen or tested, people who suffer from fibromyalgia often feel like their family, friends, or even medical providers don’t think their symptoms are real, or that they’re exaggerating to get attention.

Yes, fibromyalgia pain is real.  All pain is real. We’ll get into that a little more later.  But know, that if you suffer from fibromyalgia or some other kind of chronic pain: your pain is real.  No matter what anyone tells you. I’ve heard from so many patient’s who suffer from chronic pain that people tell them that they’re just getting older and they’ll have to accept in.  Or even worse people imply (or sometime say outright) that you’re crazy, making it up, or that “it’s all in your head”.  I’ve heard this story so many times in fact, that I wrote a book called, “Chronic Pain: You’re Not Just Getting Older, You’re Not Crazy, And It’s Not All In Your Head – Learn The Secrets To Get Relief”.  I wrote it because I want people who suffer from chronic pain to know that there IS hope for them to get better. 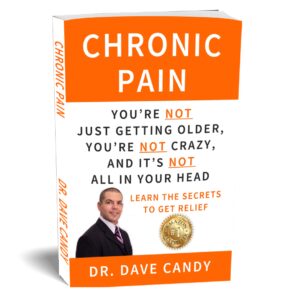 There is no known single medical cause. Fibromyalgia can be triggered by a stressful event, such as a traumatic injury (i.e. a motor vehicle injury) or emotional or psychological stress (loss of a loved one, abusive relationships, being assaulted, etc). Other illnesses may also lower an individual’s ability to cope with pain.

Think of your body’s ability to cope with stress of any kind – physical, emotional, psychological, social – as a cup of water.  As water gets added to that cup, it fills up, and when it gets full, the water starts to spill out.

Now if the pitcher is your body’s nervous system and the liquid is stress: your system can accommodate for a certain amount of stress, but when it’s coping capacity is exceeded, then you start to experience symptoms.

Because if you just clean up what’s spilled out, the next time you add any more water (or stress) to the cup, it’s just going to spill over again.

So not only do you have to clean up the mess (symptoms), but you also have to remove some of the baseline stress out of the system.

So in short, what causes fibromyalgia?  There is no one cause.  There are many.

And often the trigger… the thing that sets it off, is just the last little bit of water that’s been poured into a system that was ready to overflow at any minute.

Just like an opportunistic infection attacks your body when your nervous system is already depressed (such as being ill or having taken immunosuppressants) - so is fibromyalgia on the overly stressed nervous system.

What Are The Signs And Symptoms Of Fibromyalgia?

How Often Is Fibromyalgia Misdiagnosed?

“Misdiagnosed” is difficult to say because fibromyalgia is a clinical diagnosis based off of signs and symptoms.  However, it is common that someone will get a diagnosis of fibromyalgia just to give a label to symptoms that their doctor either can’t explain or doesn’t take the time to find the cause of.  Fibromyalgia is sometime referred to as fibromyalgia syndrome. Likewise it’s counterpart chronic fatigue syndrome is also labeled as a syndrome.

I had a professor in college who once told me that “when you see a medical diagnosis labeled a syndrome it’s code for we don’t really know what the heck it is.”

I believe that to this day.

So often, I believe that people get the diagnosis “fibromyalgia” as a cop out to explain widespread chronic pain, fatigue, and cognitive impairment that can’t be easily understood rather than going through the difficult task of finding all of the contributing factors in order to find a solution

So in short, overdiagnosed may be a better word than misdiagnosed.

What Can Be Mistaken For Fibromyalgia?

Fibromyalgia can be mistaken for:

Unlike fibromyalgia, all of these conditions (except for chronic fatigue syndrome) CAN be tested for using fairly simple lab tests.

Test to rule out other conditions that can be mistaken for fibromyalgia include:

Is Fibromyalgia Linked To Thyroid Problems?

Fibromyalgia and hypothyroidism share many common symptom, but they are not the same.  Some of the symptoms that both conditions share are fatigue, non-restful sleep, widespread body aches, brain fog, and anxiety/depression.  However, people with hypothyroidism may also exhibit thinning of har, constipation, dry skin, and menstrual irregularities. Contrarily, headaches, muscle spasms, and random patterns of numbness and tingling are more common in fibromyalgia.  In autoimmune hypothyroidism, Hashimoto’s disease, there are antibodies present that attack cells of they thyroid and may be present in people with fibromyalgia as well, which begs the question.

Is Fibromyalgia An Autoimmune Disease?

Fibromyalgia is not in itself an autoimmune disease, although many patients with fibromyalgia may have diagnosed or undiagnosed autoimmune diseases. It would be wise as at a minimum to have lab tests to check for autoimmune conditions as noted above.  If autoimmunity is a concern, seeing a rheumatologist can further help investigate the problem and rule out autoimmune diseases including but not limited to rheumatoid arthritis, lupus, Hashimoto’s thyroiditis, and celiac disease.

How Serious Is Fibromyalgia?

Firbromyalgia can be seriously disabling, although qualifying for medical disability due to fibromyalgia can prove difficult due to the fact that there are no “objective” tests use to diagnosis it.

However, people who suffer from fibromyalgia can have very serious pain symptoms that limit their physical ability as well as their ability to interact in society, and thus also affecting mental health.

Left untreated, the symptoms of fibromyalgia can get worse over time, but the disease process itself is not a progressive disease such as lupus or multiple sclerosis (MS).  Fibromyalgia may make it more difficult and painful to be active, but it does not progress to where it can cause paralysis or inability to walk.

Nevertheless, as the nervous system gets more and more sensitive, fibromyalgia pain can get more intense and sleep disturbance and fatigue can worsen over time as the hormones that regulate sleeping and waking (such as melatonin and cortisol) get more out of balance.

What Can You Do To Help Fibromyalgia?

If you want to know what you can do to help fibromyalgia, you first need to understand your triggers. Remember fibromyalgia is multifactorial, so a lot of different triggers must be considered.

You need to think about multiple body systems, not just your muscles and joints.  Remember the analogy of filling up a cup with water - or filling your system with stressors.  In order to help fibromyalgia, you need to take water out of the cup… or take stress out of your system, so that you have some “reserve capacity” leftover when other stressors eventually enter your life.

Some of the factors include:

That’s a lot to consider!  If you’d like some help to find the factors contributing to your fibromyalgia, click the button below to get a FREE Fibromyalgia Consultation (online, by phone, or in-person)...